This review appears in its original form here

, and is for this

This item arrived packaged in a retail printed cardboard box. Inside the box were the lamp itself, in a bubble wrap pouch, some screws and wall plugs in a small packet, and some basic printed instructions (not a bad attempt at translation).

The solar panel is large and glossy, and should store plenty of the sun’s energy, although that remains to be seen (if we ever see sunlight again in Yorkshire!). The panel is also tilted relatively steeply, to take advantage of a lower sun in these northern latitudes.

The 16 flat LEDs are arranged in a 4×4 pattern, and are extremely bright when they come on. I like the fact that the light can be turned on and off via a rubber covered button on the front, rather than a pinhole or a button on the back, that I’ve seen on other, similar devices. When this type of light is fully discharged, you have to press the power button to turn it on again, so it’s great to actually have access to it.

As it gets dark, the panel starts to glow, providing a very low level of light (and saving battery), but as soon as movement is detected in the PIR range, the light goes up to full brightness. It remains that way for a few seconds after movement stops, meaning you get light when you need it, and don’t drain the batteries or annoy the neighbours when you don’t!

I think a few of these devices, dotted around a garden, or along a path (assuming good access to daylight to charge the batteries), would look awesome, and act as a light / security service. The lack of power bills is a positive point too! This is a really light device, so can be fitted to all but the lightest of fences, using the two provided screws through the holes in the top of the unit.

This is a great little light, with the front mounted button, and battery saving features gaining it my recommendation.

for providing this item at a discount for review. 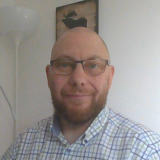